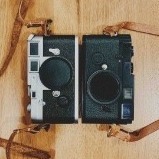 By grahamc
August 1 in Leica M10